Syniadau :: The Shape of a Future Wales :: Language

Bwrdd yr Iaith published two things last week (November 2008). A detailed breakdown of the 2004-2006 Language Use Survey, and a Powerpoint presentation entitled "The Right To Use Welsh".

The first batch of information from the 2004 survey only was published in 2006:

The 2001 census asked people to tick boxes about whether they could understand, speak, read and write Welsh ... each with only a yes/no option.

The 2004-2006 surveys sought further detail, for example giving these options under Speaking Welsh, with percentages:

These figure are roughly the same as published in 2006. But the 2008 publication gives a much more detailed geographical distrubution, which broadly splits Wales into three groups: The Bro Gymraeg (where fluency was ranged from 70% to 83%) Gwent and Flintshire (where fluency ranged from 14% to 25%) and a surprisinging regular middle ground (where fluency was between 47% and 58%).

This seems to highlight that "Speaking Welsh" means different things according to where the person concerned is. The contrast is most evident here:

And the full table is here: 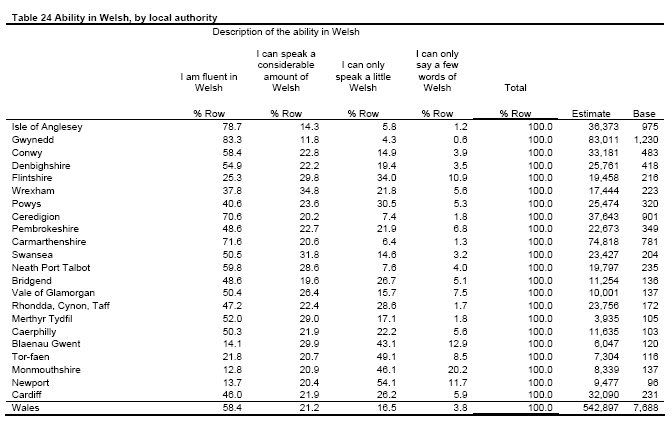 Syniadau :: The Shape of a Future Wales :: Language