Syniadau :: The Shape of a Future Wales :: Energy

The waters around the UK belong to the Crown Estate. These include not only territorial waters (within 12 nautical miles of shore) but also those parts of the sea above the continental shelf that are closer to the UK than another country. Up until now the offshore windfarms around the UK have all been relatively close to shore, as can be seen from this map for Rounds 1 and 2. 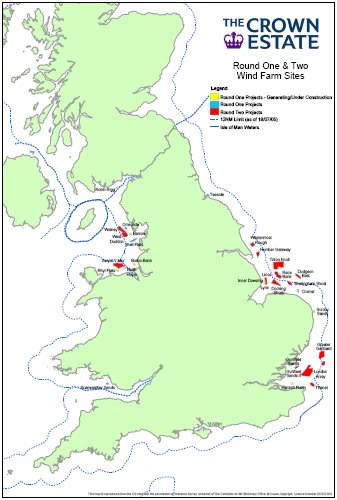 But Round 3 looks at sites which are further offshore and this raises questions of sovereignty when Wales becomes independent, since two of the bid zones straddle the maritime boundaries between Wales, England and the Isle of Man. 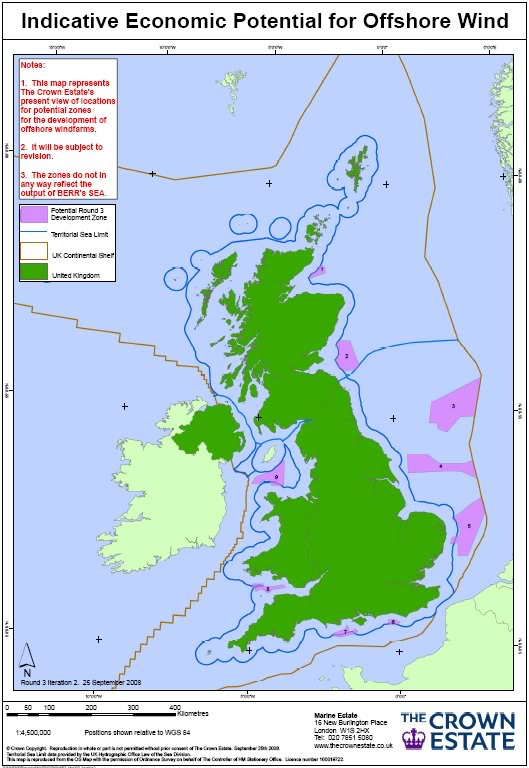 These zones do not represent future windfarms, they only mark the areas in which windfarms might be built if a constructor/operator makes a successful bid. But it would be very awkward if an individual windfarm were to straddle the future maritime border, and more awkward still if the power from any one of the windfarms was not brought ashore in the country concerned.

Interestingly enough, the UK seems to have realized this in the case of Scotland, and designates a border between Scotland and England. Their reason for this is probably much the same as it was for North Sea oil and gas; that because Scottish law is different, any disputes need to be dealt with under the relevant jurisdiction. Though it is equally interesting that the line between Scotland and England for windfarms is not quite the same as it is for oil and gas.

So this is not just a matter of independence. As can be seen from the Justice System forum on this site, the consensus of opinion is that the justice system will be devolved to Wales in the next few years. For this reason alone, there is a real difficulty which we need to address before it arises ... we simply can't rely on the excuse that independence is a long way off, or might not come at all.

The National Grid has already undertaken a study to address where the power will come ashore and its implications for the system.

It's full of quite detailed technical information, but it does demonstrate that there are indeed problems that need to be addressed. I'll focus on the relevant sections. 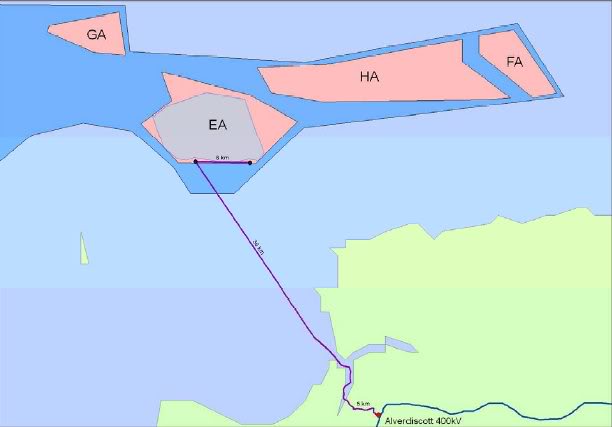 This shows that the Bristol Channel Zone (Zone is subdivided into a number of potential sites. EA is mostly in England's waters, HA and FA are mostly in Wales', and GA is entirely in Wales'. The proposal is for power to be brought ashore at Alverdiscott near Barnstaple in Devon, and this would require strengthening the grid in SW England and Cornwall. We need to be bringing our share of the energy ashore somewhere in Wales. One option for the western sites would be to bring it into the old Carmarthen Bay power station site at Burry Port, because the grid infrastructure is still closeby. The best option for the eastern sites would be to bring it ashore at the same place as power from the planned Scarweather Sands windfarm. As south Wales is much more industrialized than Devon, we might well find that grid strengthening would be minimal. 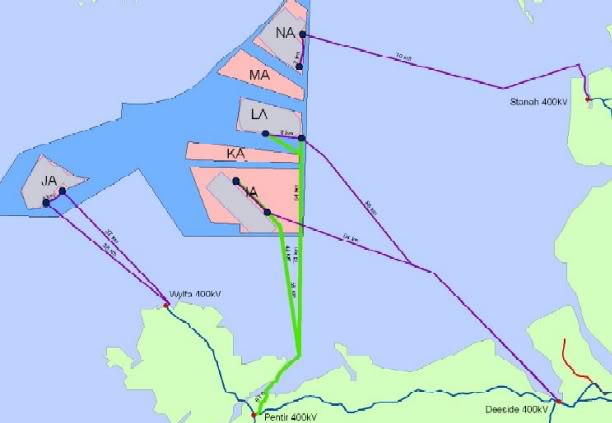 This shows the Irish Sea Zone (Zone 9). Again this is divided into a number of areas. In this instance the boundary that needs to be taken into account is that between Wales and the Isle of Man, since no part of the zone is closer to England. However, if Wales becomes independent the likelihood is that the IoM will have the same relationship with England as it currently has with the UK. So essentially IoM waters will become the international responsibility of England. As such we do not particularly need to worry about whether electricity is brought ashore in England or the IoM. There are probably very good technical reasons for choosing England, even though the cable distance is greater.

The IA area is closest to Wales, almost all (more than 90%) of the JA and KA areas are closer to Wales. Minor modifications to these boundaries should be easy. But all except 15% of the LA area is closest to the IoM. The reason for the gap between JA and the other areas is that there is a trench of deeper water between them. The subdivision of the other areas seems to be more arbitrary. At first glance it appears to reflect the shipping lanes from Liverpool, but in fact the two don't align. You can check that information from here:

Also, as an aside, the area to the east of zone 9 is both shallower and closer to shore, so I don't entirely understand the logic. But there does seem to be room for manoeuvre.

It seems to be an obvious no-brainer to bring electricity from JA ashore near Yr Wylfa, whether or not a new nuclear station is built to replace the old one. (The more astute of you will now realize what has prompted this post.) If the site is not redeveloped the existing grid connexion will suffice, if a new nuclear plant is built the grid will need to be strengthened anyway.

As for the other areas, the proposed solution of bringing some electricity to Wales and some elsewhere is right, provided that the LA area is redivided (perhaps KA could be enlarged northward and the shipping lane moved to run along the marine boundary.

The only issue for us is exactly where to bring power ashore in Wales. I would prefer to bring it ashore at Pentir, first because any electricity brought ashore at Deeside is likely to go straight to England, and second because I still hope that no new nuclear plant is built at Yr Wylfa, so bringing the power ashore here will make use of the otherwise redundant grid capacity. But that (see this post) might be a vain hope.

I understand that some might say this is all a matter of "swings and roundabouts" or "some you gain, some you lose" ... and I accept that there is nothing to prevent the Welsh and English governments mutually agreeing on any boundary or arrangement they like. The thrust of this post is to highlight that we need to be thinking about this now rather than later. If it turns out that we can't resolve a dispute by mutual agreement then international law will do it for us on the basis of the exact boundary (the line joining points equally distant from each coast) and that might well result in chopping an already developed windfarm in two.

40 Bids for Round Three

I wrote before about Round 3 of the offshore wind programme. The latest development is that the Crown Estate has now recieved 40 bids for the nine sites, two of which (the Bristol Channel and Irish Sea zones) are partially in Welsh waters.

The Crown Estate has confirmed that it has received multiple bids for each of the nine development zones for the Round Three offshore wind leasing programme, as the competitive tender process ended.

The development rights holder for most of the UK seabed said it has received a total of 40 zone bids from 18 different companies or consortia. These include international companies from at least nine different countries, it said.

Many additional companies are committed to bids as alliance partners and supply chain participants, it added.

The Crown Estate would not disclose the details of the bids or identify bidders, but insisted that the "quantity and quality" of bids received demonstrates a "healthy appetite" amongst developers.

Companies or consortia that have so far publicly announced their intentions to bid within Round Three include:
• E.ON, DONG Energy, and Fred Olsen Renewables - have submitted multiple bids for zones;
• Forewind: Scottish and Southern Energy-owned Airtricity and npower renewables with Statkraft and StatoilHydro - multiple bids;
• WPD and Clipper - bidding for a lease for the "Hastings zone";
• SeaEnergy & EDP;
• ScottishPower Renewables and Vattenfall;
• Northumbria Offshore Wind Ltd: Banks Developments, Hainsford Developments and the New and Renewable Energy Centre (NaREC);
• Eneco - the Dutch utility
• Econcern -The Dutch-owned company's project development division Evelop to lead developments.
• The MarineWind Alliance - including wind turbine firm Acciona Energy, along with wind developers OceanWind and Power@Sea

This is particularly encouraging as it follows a degree of uncertainty when Shell announced it was selling its stake in the London Array, following by some uncertainty over finance for the project.

Nobody is saying anything firm about the bids at this stage, and the idea is to negotiate with preferred bidders leading to exclusive "Zonal Development Agreements" by the end of 2009. However forty bids for nine sites would appear to indicate that there is still plenty of interest in large offshore windfarms.

Syniadau :: The Shape of a Future Wales :: Energy